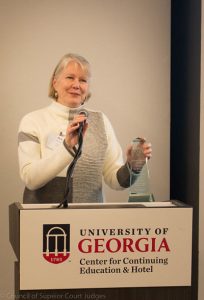 Each year, the Council of Superior Court Judges recognizes deserving judges with the distinguished Emory Findley Award. The award, named after the late Judge Emory Findley, recognizes judges for their outstanding leadership and dedication to the continued improvement of our court system. This year’s recipients were the Honorable Judge Doris L. Downs of the Atlanta Judicial Circuit and the Honorable Judge H. Gibbs Flanders of the Dublin Circuit. The awards were presented on January 24th at the Council’s winter conference in Athens, Georgia.

The Honorable Judge Downs served as a Superior Court Judge in Fulton County for 22 years and currently serves as Senior Judge. She earned both her Bachelor of Arts in Political Science (cum laude) and Juris Doctorate (cum laude) from the University of Georgia. Before her appointment to the Superior Court, Judge Downs served as an Assistant District Attorney in Fulton County. During her time in the Fulton County District Attorney’s Office, she served as lead prosecutor in over 50 jury trials. In 1986, she successfully prosecuted the first marital rape case in Georgia (State v. Daniel Warren). For her final trial in 1996, she served as the lead prosecutor for the “Doom Gang” case, where she successfully convicted 8 co-defendants for the torture and murder of a 15-year-old girl. In 1996, Governor Zell Miller appointed Judge Downs to the Superior Court, and she successfully won a contested election for her seat 4 months later. She has not only served as Chief Judge of the Fulton County Superior Court, but also as a Mental Health Court Judge and Drug Court Judge. In 2006, she founded the Behavioral Health Treatment Court, over which she currently presides. She is also currently the Chair of the Fulton County Justice and Mental Health Task Force, “Stepping Up Initiative.” During her time on the bench, Judge Downs served in many leadership capacities, including serving on Judicial Council’s Workload Assessment Committee, as Fifth District Administrative Judge, and as a member of the Council of Superior Court Judges’ Executive Committee. Judge Downs is the recipient of numerous awards, including the EPIC Inspiration Award from Emory’s Public Interest Committee, Unsung Hero Award from the Anti-Defamation League, and the St. Thomas More Award, recognizing her leadership through the aftermath of the 2005 courthouse shooting. 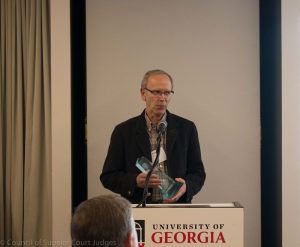 The Honorable Judge H. Gibbs Flanders is a past President of the Council of Superior Court Judges. Judge Flanders was appointed to the Superior Court Bench in 1993 by Governor Zell Miller. He was subsequently elected to four-year terms in 1996, 2000, and 2012. From 2004 to his retirement in 2017, he served as Chief Judge for the Dublin Judicial Circuit. Judge Gibbs was appointed to Senior Status in 2017 by Governor Nathan Deal. He also serves as a mediator and arbitrator. Judge Flanders graduated with honors from Georgia Southern University (BA), the University of Georgia (JD), and the U.S. Army Judge Advocate General’s School, University of Virginia. He served as a captain in the U.S. Army Judge Advocate General’s Corps for three years, assigned to the 101st Airborne Division, Ft. Campbell, Kentucky. During his time on the bench, Judge Flanders served on several statewide court-related initiatives, including his appointment for two terms as member of the Georgia Commission on Family Violence, his appointment to serve as chair of the Georgia Judicial Council’s Pro Se Litigation Committee, and his appointment by the Georgia Supreme Court as chair of the Georgia Commission on Dispute Resolution. Judge Flanders has also supported numerous community organizations, including serving as Chairman of Pine Forest District Committee of the Boy Scouts and serving two terms as President of the Board of Directors for the Rotary Club of Dublin. Judge Flanders is also a member of First United Methodist Church, Dublin, where he has served two terms as chair of Pastor-Staff Relations Committee, as Secretary for the Administrative Board, and as a Sunday School teacher for 30 years. He and his wife, Theresa, have two sons, Daniel and Jacob.