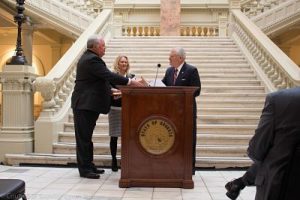 Howard C. Kaufold, Jr. was sworn in as a Superior Court Judge by Gov. Deal on January 9th, 2018. Prior to being sworn in, Judge Kaufold was a partner at Kaufold & Everett in Vidalia, GA. He earned his undergraduate degree from Mercer University and his law degree from Mercer’s Walter F. George School of Law.

Judge Kaufold will serve in the Oconee Judicial Circuit, filling a vacancy created by the retirement of Chief Judge Freddy Mullis.

He and his wife have three children and live in Vidalia, GA.