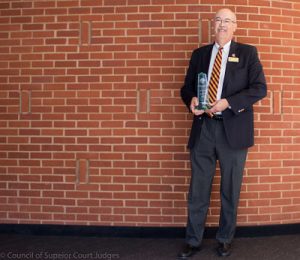 Judge Goss is a Georgia native, and received both his undergraduate and law degree from the University of Georgia. Before becoming a superior court judge in 1999, he practiced law for 23 years.

He Is also the founder and Presiding Judge of the Dougherty Superior Court Mental Health and Substance Abuse Treatment Program. He is a nationally recognized and respected leader in the field of accountability courts.

The Emory Findley Award is named for the late Atlantic Judicial Circuit superior court Judge Emory Findley, who served in that role from 1976-1994. Judge Findley died in 2004, still serving as a senior judge. The annual award is given to honor a judge who exemplifies Judge Findley’s virtues of visionary leadership, resolve, and dedication.