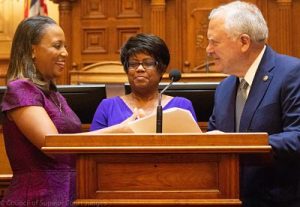 Prior to her appointment to the Superior Court bench, Judge Millender served as a judge of the Fulton County Magistrate Court. She has also had a distinguished career in private practice, served as an ADA in the Fulton County District Attorney’s office, and worked as an assistant solicitor for Atlanta’s City Court.

Judge Millender received her undergraduate degree from Clark Atlanta University and her law degree from Georgia State’s College of Law.