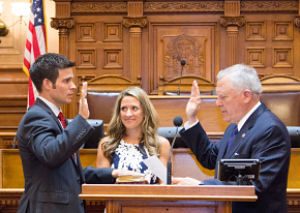 On May 26th, 2016, former state representative, Dustin Hightower, was sworn in as a superior court judge by Gov. Nathan Deal. Hightower will serve in the Coweta Judicial Circuit, filling a vacancy created by the retiring of Judge A. Quillian Baldwin, Jr. He formerly represented the 68th district in the Georgia House of Representatives. He was also a partner at the firm Miller and Hightower, Attorneys at Law. He attained his undergraduate degree from the University of West Georgia and his law degree from John Marshall Law School.